Etiquette is set of rules of behavior for human relationships. It is language signs, verbal symbols, gestures, facial expressions. Ukraine has its own system of beliefs, which reflects national character, moral values, lifestyle, and type of behavior.

Ukrainians are very nice and polite people. A few simple rules of etiquette are followed by Ukrainians. If you are invited to a family home, it is traditional to bring a gift or food. A bottle of wine or a bouquet of flowers is a good idea. If giving flowers as a present, the number of flowers in a bouquet should be uneven. An even number of flowers is considered bad luck by Ukrainians. If there are children in the house, bring a small gift for them too. When eating dinner at someone’s home, guests are often asked to give a toast at dinner.

Ukrainians do not shake hands across the threshold of a door. It is considered bad luck to do so. Ukrainians are known for their generosity when it comes to cooking and feeding others. Refusing food may be considered rude and impolite. Ukrainians are not greedy; they can easily share everything they have with people around.

Ukrainian people take off shoes when entering a home. The streets in Ukraine can be quite dirty and this is very important to keep apartments clean. When using public transportation, seats should be given to the elderly, mothers with children, and people with disabilities.

In Orthodox and Greek-Catholic churches, women wear scarves or hats, and men take off their hats. Women are not allowed to enter churches wearing pants or jeans, only skirts are acceptable.

Women in Ukraine never sit on stone steps or table corners, as they believe they will get sick. These superstitions are taken very seriously by Ukrainians. Legs should not be crossed in such a way that the bottom of your shoe faces another person.

Ukrainian folk clothing for men includes embroidered white shirts, paired with pants of a bit darker colors. Traditional Ukrainian shoes were made of birch bark. They are not worn anymore, because they are quite uncomfortable, but these types of shoes can still be found today as souvenirs at Ukrainian markets.

Modern Ukrainians also like to dress up, mostly in casual and smart casual style. T-shirts and jeans and trainers are absolute favorites of Ukrainians nowadays. Skirts with high heels for ladies and sports costumes for both men and ladies are very popular in Ukraine. Winters are cold in Ukraine. People wear a lot of warm cloths: sweaters, coats, scarves, hats, gloves, and boots.

All churches still require women to cover their heads. Bare arms and legs, tops and shorts both for men and women are inappropriate in the churches. 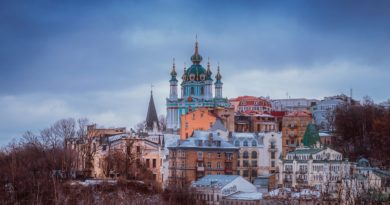 One thought on “Common Ukrainian Customs and Clothing”