Turkey has more than 75 million people that live there. The biggest city is called Istanbul. Here you can cross a bridge, called the Bosphorus Bridge, from Europe, into Asia. There’s even a sign saying ‘welcome to Europe’ going one way, and ‘welcome to Asia’ going the other.

Even though Istanbul is the biggest city, it isn’t the capital city; that is called Ankara. Ankara is where all the Government buildings are.The people of Turkey are very friendly, and love to show people their language, food and music.

Most Turkish people are Muslims. In towns and villages, you’ll see lots of mosques, which are like churches, and have tall towers called minarets. At different times of the day, you’ll hear a sound coming from the mosque; this is called ‘call to prayer’ or “ezan” in Turkish, when the people go to the mosque to pray. 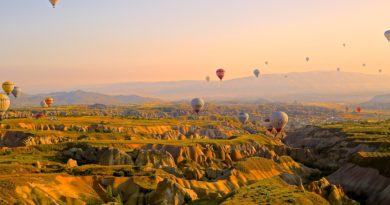