Thai childrens’ games –Thai culture for kids
Time to Play! Thailand’s 3 Most Common Games for Children
E-Gar-Fuk Khai– In some American schools, the game cat and mouse is commonly played. In this game, a circle is drawn and rocks (cheese) are put in the middle of the circle, while one child (cat) guards it. The object is for all of the other kids playing (mice) to take the cheese without the child guarding it (child in the circle) touching them. In Thailand, it is called Crow Sits on the Eggs.
Ling Ching Luk– Another popular children’s game of Thailand, is called Monkey’s Run for a Pole. In this game, one child stands in the middle of every other child that will be holding on to a pole. The one child in the middle, will not be holding on to a pole. That middle child is the monkey. The players will be given a signal by an adult, to run to another teammates pole, in an attempt to switch positions. At that time, the monkey, or the middle child without a pole will try and touch a pole before another opponent does. The child without a pole is the new monkey.
Tang Te– a popular activity in Thailand among kids in kindergarten and first grade. In America, this game is also known as hop scotch. For this game, the ground is drawn on using chalk, numbering squares up to ten. The children must try to hop into every square without stepping out. 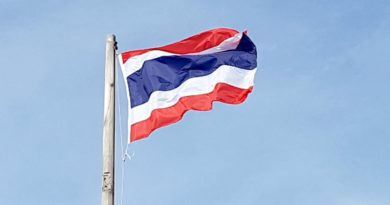 The Thai Flag and National Sports

One thought on “Thai childrens games”