2)      Wizards: For this game, four or more children must take part in it. One child runs after all of the other children and tries to tag them. Whomever the tagger touches, they must freeze and scream “help me” until a child who has not been tagged can touch them and free them. This game is over when all of the kids have been tagged.

3)      P’yanitsa: This game consists of two to four players for this card game. The players attempt to collect all of the cards. One player lays down a high numbered card, and each player does the same thing. Whoever has the highest number when they throw it down gets the pile. The child with the most cards at the end of the game wins.

1)      Borsch: Beet soup. Extremely common, famous for being a base soup in Russia. It is packed with vegetables and meat, and topped with a spoonful of sour cream. It can be eaten for lunch or an appetizer for dinner.

2)      Pirozkhi: Little pastries full of potatoes, cabbage, cheese, or a meat of choice. It can be an appetizer, a snack, or even dinner for small children.

3)      Bilini: this appetizer is so important; it is served every year on the first day of spring, at a festival called Maslenitsa. Bilini is served with jam, cheese, onions, caramel, or chocolate syrup. It is a pastry roll that children love.

1)      Morozhenoe: Russian ice cream. Children love ice cream in Russia, and it is often served with toppings like syrups, candy, nuts, or sprinkles. The ice cream comes in many flavors, and is a highlight for kids in Russia.

3)      Medovie: eight layered honey cake with a sour cream and milk mixture filling. This is typically a pricey cake when made correctly, but a huge hit in Russia.

2. Combine flour and baking soda in another bowl, and then add   to liquid   mixture

3. Mix until even, add vegetable oil to frying pan

4. Scoop mixture with spoon, add circular size mixture to pan. Fry until one side is golden, flip, repeat.

3. Cover the pot, put in refrigerator for a few hours.

4. Transfer meat on to skewers, alternate with vegetables. Grill on

3. Cook until water evaporates, sautee onion in olive oil until

June 1st, Russians honor small children and the youth with child proof, family oriented activities, speeches, programs, and events to enlighten everyone on the well-being of Russia’s youth. There are charities and events for abused children, and more child friendly shows on television on than any other day of the year. This day is a holiday for all Children of Russia.

1)      BeliyeNoche: Also known as white nights, Russians gather at the famous festival to celebrate the zenith of summer, when nonstop 24 hours of sunshine covers the city of St. Petersburg. This day occurs from June 11th to July 2nd. The tradition is to head to the rivers to watch the bridges raise, so that the boats can pass through. According to Russians and tourists, it is truly a breath taking site.

2)      New Year: The biggest celebration hands down, Russians prepare for this day weeks in advance. The belief is that “the way you celebrate the New Year will indicate how you will fare in the remainder of that year.” Russians bring in the New Year with their families, but after midnight is when they head to parties and clubs.

3)      Easter: A major holiday of Russia, Easter day changes each year depending on the lunar calendar. There is a feast, egg paintings, and religious meeting as well. Easter in Russia is a lot like Easter in the Western hemisphere.

The traditional Russian women’s attire was created to shine a light on their dignity, and “emotional restraint.” Women work in their everyday clothing, but the clothing is still very beautiful. Red clothing is considered to be the most beautiful color. Canvas and wool clothing is decorated and embroidered with crosses, herring bones, and patterns of people and animals. The traditional colors are red, blue, green, white, and yellow.

Mens dress attire in Russia have a major rule that t shirts and shorts are almost never appropriate to wear in public unless you’re at a beach or a park. Denim jeans are way too casual for Russian men as well. Men dress in long trousers with a button up shirt and dress shoes. Dark clothes are very common for men.

3 Must See’s of Russia

1)      Golden Ring Cities: a line of cities northeast of Moscow, also known previously as Zaleyse. This place is home to monasteries, cathedrals, churches, and domes of the 18thcentury. It is one of the most beautiful, antique, and unique places to take your children to learn about history.

2)      Cat Theatre: a popular children’s theatre, a cast of home cats complete acrobatic tricks and stunts for the liking of all young children. There are also clowns and other side acts featured in the show, but most visitors come for the cats.

3)      Gorky Park: This park features a Russian spacecraft area and many other play areas as well. Older children come to Gorky Park for the rides, because there are plenty of them for everyone.

Russian music is heterophonic; this means that there is one melody among different voices. It is diverse in dialect, and the traditional music of Russia is folk music. There are ritual songs, nonritual songs, and instrumental music as well. The main instruments used are the schwam, horn trumpet, svirel, and kugikly. Most of the instruments are wind instruments, to create a specific sound. Russian music is typically personal and religious. 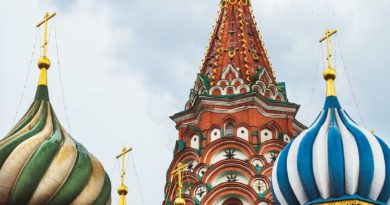 All About Russian Geography