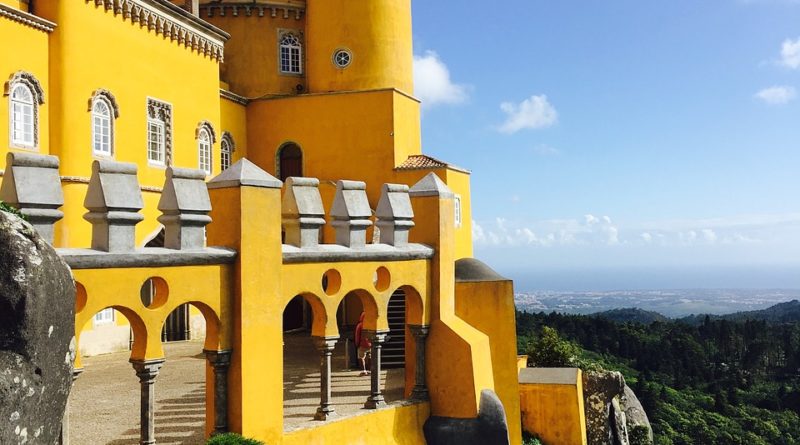 Portugal may seem very small for a country, but with over a thousand years of history, it has many interesting places to visit and discover the past or just enjoy the landscape. All of its major cities are quite different from each other because of the geography, climate and cultural influences in them.

The southern edge of the country is called Algarve and faces the Mediterranean Sea, making the beaches very warm. The dunes and cliffs are so beautiful, they’re filled with tourists from all over the world during the summer. The houses there are very unique, white with blue stripes in their walls and gorgeous chimneys that looks like lacework. This style comes from the Moorish occupation in the south of the country in the Middle Ages.

Near the capital, visiting Sintra means the experience of a lifetime. The Castelo da Pena (Castle of Pena) looks like a real life fairytale castle, with high towers and pastel walls. It sits atop a forested hill and overlooks Sintra and the capital of the country, Lisboa.

Lisboa, or Lisbon, is the biggest city in the country, right by the coast where the Tejo river meets the Atlantic Ocean. The city was rebuilt after an earthquake in the 1800’s so all buildings downtown were made to match, and the old, winding cobbled streets are quite charming. It’s also full of cultural exhibits and museums, like the Antique Art Museum with many paintings you might have seen in books already, monasteries and monuments to discovery to admire and explore.

In the center of the country, there’s something very unique. Near Coimbra, a city built around its University, there are the ruins of a roman city called Conimbriga. They’re so well preserved, you can see the beautiful mosaics and fountains that Romans built, and learn a lot about how they lived in their houses and public spaces like baths and town squares.

To the north, there’s the second biggest city, Porto. Being one of the oldest settlements in the country, it has many beautiful things to see and learn from. It still has walls from the first medieval settlement that were finished in 1370, more than 600 years ago! From there on, you can visit examples of all major architectural styles that happened in Europe, mostly by visiting the beautiful cathedral and many churches and museums.

Asides from the many lovely cities to visit, the rest of the country has beautiful, diverse landscapes that go from desert to rocky mountains, through lush pine forests. There are great camping sites everywhere and lots of sports to play, for the more adventurous tourists!