The Italian alphabet has 26 letters from A-Z just like the English alphabet. The letters j  (i lunga), k (cappa), w (vi/vu doppia), x (ics) and y (i greca) do appear in the Italian alphabet, but they are thought of as foreign letters. These letters are used mainly in foreign words and pronounced how foreigners would pronounce those specific words. These are the 26 letters and how you pronounce them in Italian:
A (a), B (bi), C (ci), D (di), E (e), F (effe), G (gi), H (acca), I (i), L (elle), M (emme), N (enne), O (o), P (pi), Q (cu), R (erre), S (esse), T (ti), U (u), V (vi/vu), Z (zeta)
Italians speak the official language of Italian, which is the Tuscan dialect known as Italiano. Many Italians also speak German, French, and Ladin (in some regions in Northern Italy).   Ladin is a dialect that is close to Swiss Romansh and Friulian.  There are many other Italian dialects and each region has its own.  Some of these dialects are very different from the Italiano dialect.  Italian is a Romance language because ancient Romans spoke Latin and Italian is based on Latin. Many of the Italian words have Latin roots. The Italian language has a soft pronunciation.  It sounds like a melody.  That is one reason it is used in opera.  More than 98% of Italians can read and write. Education is highly valued.  Students learn to speak English, French or German in schools.
Other countries that speak Italian are Switzerland, San Marino, and The Vatican.  Parts of Croatia, Slovenia, Malta, and Monaco also speak Italian.  There are 66 million speakers of the Italian language in the world. Italians and their descendants who have moved to other countries speak Italian and varied dialects.  Larger populations of Italians live in Canada, the United States, Brazil, Argentina, and Australia.

How to teach kids Italian 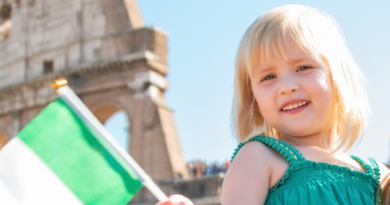