DINOLINGO The Dutch national soccer has played three finals in the world cup soccer; in 1974 (against Germany), 1978 (against Argentina) and 2010 (againstSpain), but unfortunately never won the cup. It is found to be quite remarkable that such a small nation plays a rather large role on the international soccer stage. Soccer is national number one sport: cycling number two and speed skating number three.

Amsterdam is the capitol of The Netherlands. This city is known for is tolerant ambiance. There is a historic reason for this rather loose and tolerant attitude; During the seventeen hundreds, Amsterdam was a safe haven for many refugees and other thinkers, fleeing dictator regimes throughout Europe. When these people all came together in Amsterdam, they discovered that the town accepted other perspectives. As long as you paid your tax on time, you where welcome in Amsterdam.

Although the Netherlands is a relativelty small country, it has over thirty different regional dialects. The part of The Netherlands below the major rivers Rijn, Waal and Maas is historically Catholic and orientated more toward Belgium and France. Here dialects such as “Brabants”, “Limburg” and “Zeeuws” is spoken.

The part above the main rivers is more traditionally Protestant and orientated toward Scandinavia. Here dialects such as “Gronings”, “Drents” and “Achterhoeks” are spoken. “Fries” is actually an official language spoken in Friesland, a northern territory in Holland.

DINOLINGO “Sjoelbakken”: This is a very popular Dutch shuffleboard game. Sjoelbak is loved by kids, but adults can also play it. All you need is a 6 ½-foot wooden shuffleboard table and wooden disks. Every player has three chances to get four wooden disks to pass four marked arches that are numbered from 1 to 4. The player with the highest number of points wins the game.

“Kinkkeren”: Round shiny marbles have captured the imaginations of Dutchchildren for centuries. This game of shooting marbles dates back to the Romans and is still extremely popular in the Netherlands. Dutch children have even gone as far as giving specific marbles special names. For example, a large marble is called a “giant giant bonk.” There are many varieties of marble games, however they all require players to use their marbles to “shoot” competitors’ marbles out of a large circular arena marked on the ground. The last player with untouched marbles wins the game.

DINOLINGO One popular Dutch story is that of Hans Brinker. Hans Brinker was a little Dutch boy that saved The Netherlands. On a lovely autumn day he was out for a stroll with his friend Liesa. They where picking flowers, then sat in the grass to eat some chocolate. It was a beautiful early fall day until the weather suddenly turned. A gigantic storm rolled in and the wind got out of control. The waves in the sea swelled and before Hans and Liesa realized it, they were pounding on the dykes. One dyke almost collapsed, but Hans quickly put his finger on the point where the dyke was about to break. In the mean time, Liesa ran to the village calling for help. Swiftly, a group of strong construction workers showed up to repair the damaged dyke. Little Hans Brinker was reconized as a hero.

DINOLINGO ‘Sinterklaas’ is one of the main traditional holidays. Sinterklaas is a bishop, originally from Spain. Together with his friendly helper ‘colorful Peter’ he travels to The Netherlands to deliver presents to children. He does so by climbing the roofs of the houses on his strong, white horse named “schimmel”. While on the roof, colorful Peter will climb through the chimney and put presents in the kids shoes, which have been placed beside the fire place.

Another important Dutch holiday is “Koninginnedag” (or Queens day), celebrated on April 30th. People celebrate the Queens birthday by dancing, singing, eating, and drinking in the streets. Traditionally, this is also a great opportunity to sell off old, unused items that have been sitting in basements. Many city centers become enormous ‘garage sales’.

DINOLINGO  Wooden shoes are the typical traditional shoe ware. They are remarkably light, comfortable, and actually very good for your feet. They are very handy and safe on a Dutch dairy farm just in case a cow might step on the farmers foot. Wearing wooden clogs protects the farmer’s toes.

In addition to being a semi-safety shoe, wooden shoes are warm. During the winter months people who where them place straw in the shoe as insulation, thus making them very warm. When the wooden shoes get worn out, they are often nailed against a barn or other building wall and used as a place to plant flowers or greenery.

DINOLINGO  The number one fast food in the Netherlands is fresh cut Frenchfries served with a variety of sauces. In addition, local favorites include eel- and raw herring sandwiches, hardy deep brown bread rolls with Gouda cheese, and rich potato dishes like ‘hutspot’ and ‘boerenkool’. Hutspot is made from boiled potatoes, carrot and onions. After it is boiled, it needs to be mashed with lots of butter and a variety of cheeses. This is all served with traditional sausage and a yummy creamy mushroom gravy.
You will also find a big variety of delectable sweets like chocolate, spiced biscuits, and “stroopwafels”. Stroop wafels consist of two tiny, thinly cut waffles with a thick carmel syrup between that crystallizes the cookie into a chewy morsel. Before eating, you can place the cookie on top of a hot cup of tea or chocolate, in order to soften it a bit. 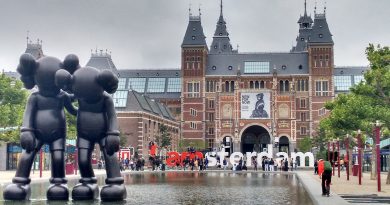