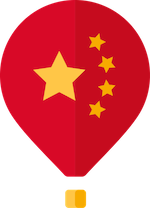 Chinese Culture for Kids
June 15, 2011June 29, 2021 dino lingo 1 Comment 8 eight lucky number, Chinese fun facts, four unlucky number
Gift giving can be a very hard activity in China! To begin with, gifts might not be accepted but this doesn’t mean that others don’t want them, it’s just that some people think that a gift should be refused three times before being accepted. Scissors, knives and anything else that could be used for cutting should not be given as gifts because they could cut the relationship with the person giving the gift. Eight is a very lucky number in China, so giving eight of something is like inviting luck to the person receiving the gift. Four is an unlucky number in China because it sounds like the word “death” so never give four of anything as a gift. When you want to give someone something, show respect to the other person by offering the gift with two hands. And don’t be surprised if someone tucks a gift away to open later, because opening things in front of people is considered rude. China and Chinese Culture, fun facts, food, music, literature, flag, population and more Online Chinese lessons for kids: dinolingo.com
5 / 5 ( 14 votes )